Bishop Peter Joseph Jugis is a native of Charlotte, N.C., and is the fourth Bishop of the Diocese of Charlotte.

Bishop Jugis was baptized at St. Ann Catholic Church in Charlotte in 1957 by Monsignor Michael J. Begley, who would later become the first bishop of the newly formed Diocese of Charlotte in 1972.

Bishop Jugis was educated in Catholic and public schools in his hometown of Charlotte, earning a degree in business administration from the University of North Carolina at Charlotte in 1979. After graduation he entered the seminary at the Pontifical North American College in Rome and studied at the Pontifical Gregorian University in Rome.

He was ordained to the priesthood on June 12, 1983, by Pope Saint John Paul II in St. Peter’s Basilica in Rome. END_OF_DOCUMENT_TOKEN_TO_BE_REPLACED 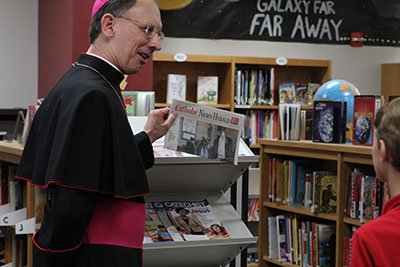 It is tradition for every bishop to have his own coat of arms and motto. Similar to many bishops’ coats of arms, Bishop Peter J. Jugis’ coat of arms is composed of the shield with its charges, motto and external END_OF_DOCUMENT_TOKEN_TO_BE_REPLACED