The Role of Pastoral Councils 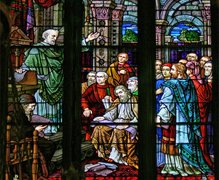 Blessed John Paul II expressed his concern over the balance between the roles of the pastor and the laity at parish level. Some people will point to his comments and declare we are going back before Vatican II, and the laity will have no say in matters concerning the Church. In actuality, we must read the comments in the light of the scriptures and the traditions of the Universal Church, not in the light of our own experience in America.

It is not our history nor our tradition in this Diocese that the role of the pastoral council is to make decisions for the pastor. It has always been understood, as is echoed by the members of the Synod on 1987, that the pastoral and finance councils have an advisory/consultative role. It is very clear from the comments made at the Congregation for Clergy that the form of pastoral council used here in the United States is held up as a wonderful example of lay participation in decision making.
So what is the role of the pastoral council? To understand it we must first understand the role of the pastor. The pastor is charged by the bishop with responsibilities outlined in canon law which are:
The Pastor’s charge is for the entire territory (parish)under his charge, Catholic and non-Catholic alike. The pastoral council advises the pastor concerning these pastoral matters just as the finance council advises the pastor concerning financial matters. The laity’s role is to use their knowledge of the community to advise the pastor concerning pastoral matters. But it is important for the faithful to recognize that it is the pastor’s responsibility alone to make the final decision.
This may sound strange to democratic Americans who feel that a vote is required for every issue. It is not strange in either the Scriptures or the Tradition of the Church. But because it is the pastor’s ultimate responsibility to make the final decision, that does not mean the laity have no voice and no role. These same traditions and Scriptures hold that important decisions should not be made by one person alone. When we look in the Acts of the Apostles we can see that the Apostles never made an important decision without going to the community for advice and then praying as a community for guidance. There was never any question on the part of the faithful as to who was to make the final decision. But also there was no question that the Apostles knew that they must also consult with the community of the faithful, since it is in the Church as a whole we best come to an understanding of what the Spirit is trying to do within our lives and our Church.
The Second Vatican Council and Pope Paul VI insisted on the importance of pastoral councils on the local, regional and diocesan level. Pope John Paul II has repeatedly emphasized the same, expanding their scope and importance within the Church. Catholics today live in a time of unprecedented opportunities to be involved in the life of the Church and help guide the Church into a new century. We as Catholics must now take seriously our role to assist the Pastor in his ministry of the entire parish for, as Christians, it is our ministry as well.
Loading Comments...